See my article on this hike, “Find a Trail to History,” in the October 2017 issue of Northwest Prime Time.

The Coal Creek trail to Redtown, site of industrial mining in the late 1800s, was the first hike I did in Washington and the inspiration for Hiking Washington’s History.  I could walk out of my suburban home, follow a social trail down a hill, then a deer trail through wet land to Coal Creek. 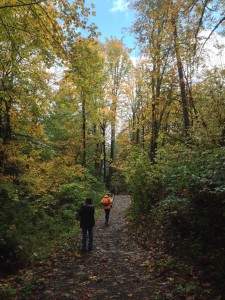 The trail followed the creek, past an old farm-site (with apple trees), past mining artifacts (wagon wheels chained to a tree, chunks of coal), onto the old road-bed of the Seattle and Walla Walla Railroad, past a cinder mine and the remains of the railroad turn-table, and finally reached Redtown.  Near the end of the hike there were old interpretive signs and a black hole in the ground–an air shaft going down 100 feet to the mines. 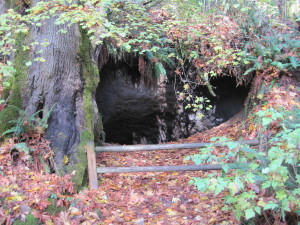 The trail was rich in both natural and human history.

In the 30 years since my first hike King County has greatly improved the trail, part of the Cougar Mountain Regional Wildland Park.  Updated, easy to read interpretive signs mark the Redtown end of the trail.  Bridges and stairs have been constructed.  The Primrose loop has been restored.

The most important charms remain–the concrete blocks of the turntable covered with fall leaves, the North Fork falls full in October, the remains of a wood-constructed plume in the creek and the visible coal seam, even the bricks discarded from the Mutual Materials lot, now a housing development.  You can still walk this three-mile trail, out of sight of homes or parkways, and be greeted by this weathered sign, an historic artifact on its own. 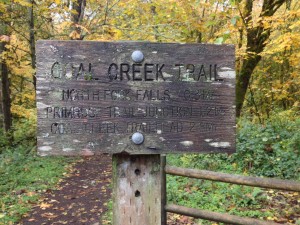 Attending the Washington State Trails Coalition Conference last weekend, I enjoyed a history walk through Richland’s urban greenbelt led by Nancy Doran.  The narrated walk embodied what I call a virtual trail, a walk on sidewalks, trails, even through parking lots when a detour was necessary–all connected by a story, the story of Richland’s World War II history.  My literary acquaintance with Richland comes through Paul Loeb’s Nuclear Culture and Kathleen Flenniken’s volume of poetry, Plume. This on the ground walk brought more social history into the picture.

Richland was a small farming town with only 247 residents when the United States government plucked it and the nearby towns of Hanford and White Bluffs off the map as the perfect place to produce plutonium for the atomic bomb.  Farms, homes, and some businesses were forced out in 1943 and housing for 11,000 workers was quickly built.  Richland became a bedroom community.  We walked past the alphabet homes–built on floorplans A, B, D, E,F or G–with the goal of having high and low income earners living side by side.  We saw the site of the women’s dormitories, which anticipated the housing needs of single women workers.  We saw the few buildings that preceded the 1940s, the current high school with the Bombers mascot, and a lovely walkway along Hip Deep Creek to the riverfront trail.  The Sacajawea Heritage Trail goes for miles along the Columbia River, connecting the Tri-Cities. 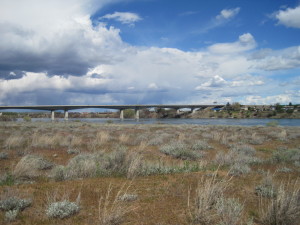 Much of the architecture along the way reflected the technology and mid-century modern tone of the city.  The thoughtful planning of G. Albin Pehrson left parkland as a buffer between homes and businesses, land through which the paved urban trail goes today. For those without a guide, the trail is marked in the sidewalk but volunteer-led history tours are periodically offered through Richland’s Parks and Recreation Department.

A brochure by Gary Fetterolf, “Walking Tour of World War II Era Alphabet Homes,” describes the alphabet homes and the origin of street names, named after army engineers.  It is available at the new 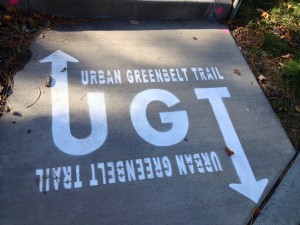 Hanford Reach Museum, a concrete structure rising out of the windswept ground, which broadens the story to the river and the land around it.