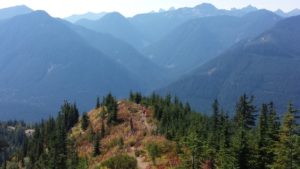 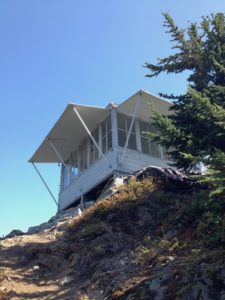 When I visited the site of Kettle Falls while researching Hiking Washington’s History, I had read the description by Mourning Dove of her family’s visits to the “roaring waters.” The traditional fishing site, where many tribes gathered in the summer to catch salmon, is now buried under Lake Roosevelt, created by the damming of the Columbia River.

Last winter, I met Lawney L. Reyes at an authors’ night at Island Books.  He was clearly the oldest author there, and I bought his book, White Grizzly Bear’s Legacy.  Just a month or so ago, I met his nephew on a bike ride in West Seattle, and returned to the book.

Reyes, too, wrote about Kettle Falls, where his people, the Sin Aikst, once fished.  The Sin Aikst are now known as the Lakes tribe and have been absorbed into the Colville Confederated tribes.  Reyes describes the tribes gathering in June.  “As a boy, I would stand in wonder as the chinooks, some more than a hundred pounds in weight, leaped the churning falls…. I still recall the roar of the falls and the voices of the people shouting instructions to each other.  I’ll never forget the beauty of the hundreds of tepees of the different tribes.  They lined the shores of the river close to the falls.  There were horses and people everywhere.”

Kettle Falls was once the center of Sin Aikst culture.  Reyes quietly and poignantly tells the story of the loss of this food source and history when the dam was completed in 1942.

It has been more than ten years since I hiked to Indian Racetrack in the Indian Heaven Wilderness doing “research” for Hiking Washington’s History.  The racetrack hasn’t changed, but the approach has.  The last time I was there, riders and hikers appeared from the opposite side of the meadow, and now I know how.  They came up Trail 171 from FS Road 65 on the west side of the wilderness.

I had driven up Road 6048 from the southeast to the trailhead near the Red Mountain lookout.  That road is now gated due to frequent vandalism of the lookout. This is the third structure dating from the original in 1910. 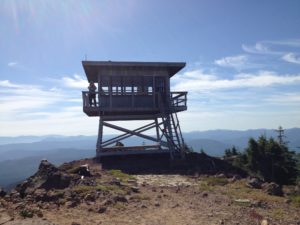 My hardy Tuesday Trekkers group came up Trail 171 on a beautiful blue sky day in late August after a few days of haze.  After reaching the racetrack, which is still a straight line embedded in a meadow, we sat on a skinny log for lunch.  The meadow is shrinking as trees encroach, and the old sign proclaiming Klama’t for the racetrack has disappeared, but the feel of a gathering spot is the same. On the opposite side of the meadow,  we continued up Trail 171, desserting on abundant huckleberries.

Cool breezes mitigated the sun exposure on a mostly bare knoll dotted with balsamroot.  Where the trail reaches Road 6048, we walked up to the lookout and luxuriated in glorious views of Mt. Adams, Mt. Rainier, Mt. St. Helens, and Mt. Hood.  After three days of hiking around Mt. Adams for our annual retreat, we were sure of our identifications. 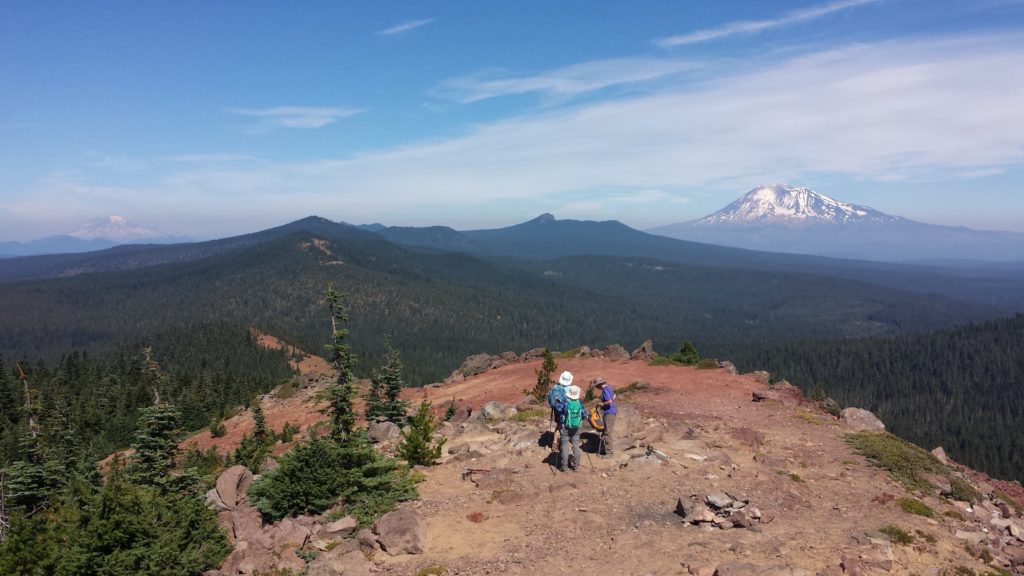