When our family visited Washington in August 1980, there were masks hanging in the garage of the house we rented.  They were a hold-over from the eruption of Mount St. Helens just a few months before (and perhaps a foreshadowing of our life in Seattle during the pandemic forty years later).  We moved out from New York City in January the next year and began to hear the stories of where everyone had been when 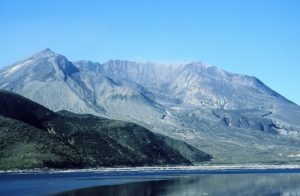 the mountain erupted.  Here’s a new one I hadn’t heard from Gary Rose, friend of my good friend and writer, Joan Burton:
“Forty years ago tomorrow at approximately 8:30 am two close friends, Dave and Maxine Nicholson and myself, were on our skis headed to Camp Muir located at the 10,000 ft, level on the south side of Mt. Rainier to enjoy a great day of spring skiing.  We were hoping to find a rather rare condition called “Corn Snow” found in almost no other area in the U.S. except the Cascades and sometime the Sierras.  It occurs in the spring time and  is caused by the freezing and thawing cycle, giving the snow surface a unique consistency that skiers “Die” for.
We left Paradise early and were near the 8,000 ft. elevation level on a beautiful cloudless morning.  Having just stopped for a short rest and bite to nibble on, we were putting on our skis when we noticed Mt. St. Helens, some 30 miles to our southwes,t blowing hot ash high into the air from it north side.  At first we assumed it was “showing its stuff” as it had done a couple of times in the last few weeks.  We resumed our climb upwards towards  Camp Muir keeping an eye on the growing ash cloud coming from St. Helens.  Within 10-15 minutes the black cloud had grown to an estimated 60-80,000 ft.  (15 miles) into the sky above the mountain and was drifting NE in our direction.  At no time did we hear a rumble or explosion which was heard in Seattle and as far north as Bellingham.  Our first indication that maybe we should forget Camp Muir was when we noticed lighting strikes between the approaching dark super heated ash cloud and the ground below.  I had experienced lightning storms before while on the Muir snowfield and for sure, it is not a place one wants to be in a electrical storm.
With haste we scrapped the idea of Muir, pealed off our climbing skins, adjusted our binding to down hill mode and made a few turns in ideal spring corn snow.  A few hundred feet below, the first rain drops hit us and the snow immediately took on a grey/brown color.  Each raindrop uncased a blob of ash and soon our clothes were sopped wet and covered in grey ash.  To add to our misery all of a sudden it was like our skis hit sand paper and they would not slide.  Snow and ash built up and stuck to the bottoms of our skis.  We took them off, tied them to our packs and proceeded post-holing on foot  towards the parking lot at Paradise.  Finally we staggered into Paradise to find a couple of inches of ash all over everything, cars, buildings, trees, everything!  The Park Rangers were going ballistic.  All uphill traffic had to be stopped at the park entrance and Rangers were making up car convoys of park visitors headed by a Ranger Patrol vehicle with flashing lights.  We, along with every one else, were  shuttled  down the mountain and out of the park.  About 10 miles west of the National Park we drove out from underneath the black cloud and into the sunshine.
Photos?  To save weight not one of  us carried a camera that day.  You will just have to believe my story.  Fifty seven people died in the eruption, 1,300 feet of the top of St. Helens was blown off and millions of trees blown over and destroyed.