This summer I returned to Cascade Pass and a backpack to Stehekin, retracing the hike I described in Hiking Washington’s History.   My companions were my daughter–Anne Bentley–a hiking friend Marlee Richard–and her daughter Carrie Richard.  When I hiked this route in the 1990s a shuttle picked up three miles east of Cottonwood Camp, cutting out nine miles of hiking, but the meandering force of the Stehekin River has washed out parts of the old road the trail follows.  We needed to parse our 21 miles into three manageable parts.

Like every backcountry hiker, we had to take our chances at getting camping permits, leaving Seattle as early in the morning as we could stand it to drive to the North Cascades Wilderness Information Center in Marblemount.  It opens at 7 a.m. in the summers and issues permits first-come, first-served for the next night.  We were lucky enough to get into Pelton Basin Camp, which is just over the pass.  The night before the hike began, we camped at the trailhead, plenty of spaces available at Johannesburg Camp, and threw ropes over slim branches to cache our food from bears. 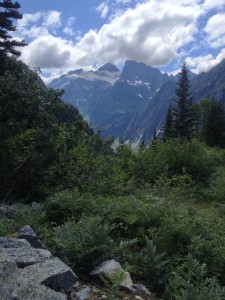 I’ve hiked to Cascade Pass three times now, and only the first time was the weather clear enough to take in the spectacular views.  This time it was rainy and cool, so we didn’t linger.  By early afternoon, we were standing under cedar trees at Pelton Basin to keep dry, then playing hearts in one tent, and hoping for the skies to clear. 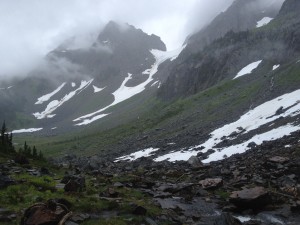 Gradually, they did, the next day, teasing us with appearing and disappearing views of the mountains and the creeks cascading down to form the Stehekin River.  This was the long middle day hike to Bridge Creek.

We lunched at Doubtful Creek, and my companions hiked up to Horseshoe Basin while I tended the packs.  After a foreshadowing of scat, we did see a bear heading up a hillside of huckleberries, causing only a brief pause in our travel.  We rested on the benches of the aged picnic table at Cottonwood Camp, then plodded on to Bridge Creek, where we had the luxury of sheltering cedar trees, a babbling creek, and two picnic tables, enough to dry out the tents and pack covers.

The next day we chose the Pacific Crest Trail route to High Bridge where hikers converge to greet the shuttle.  After a half-day hike, we rode to our reward–a night at the Stehekin Valley Ranch and the comforts of showers, flush toilets, and full-course dinners.  The fourth day’s ride to the Stehekin Landing took us to the bakery, organic farm, Rainbow Falls, and a history stop at the old schoolhouse, followed by a sunny, sleepy boat ride down Lake.  The Stehekin Valley is magical, no matter the weather.