I’m not a climber, so the overcrowding at Camp Muir–the overnight stop on the climb to Mt. Rainier–and the reports of hundreds of people on the slopes of the Three Sisters in Oregon don’t bother me so much. I am a hiker, however, and I hike mainly for the solitude–getting away from the city or suburb, away from driving, from fixing supper, from hassling phone companies, from scrolling Facebook. In the 35 years I have been hiking in the Pacific Northwest, I have felt less and less solitude on the trails.

I have twice reached the top of McClellan Butte, a nine-mile round-trip, 3700 foot elevation gain hike off I-90 west of Snoqualmie Pass—it’s no easy stroll. The first “summit” was in the late 1980s with the Issaquah Alps Club. The guide was an 80-year-old woman and the one companion was a young man working at a place called Microsoft; it was an inspiring introduction for a newcomer to the Cascades. The second time was a few years later in the 90s. When I again reached the top I had to share it with a guy on his cellphone, yakking away about his awesome hike.   I couldn’t believe his total disregard for the awesome experience other hikers wanted to have—away from irksome human behavior.

Now that behavior is common on the trails—people broadcasting the experience instead of just having it. A hundred parked cars stretch down-road from popular trailheads on a weekend. Gross blue doggie bags perch beside trail markers. I will never forget the image of a group of young people “mudding” with their truck—seeing how far they could dig it into and out of the mud in a meadow alongside the historic Naches trail northeast of Mt. Rainier.

Luckily, I’m retired now, and I can hike on weekdays when the crowds are smaller, but this is a problem for us all if solitude and the sounds and sights of nature are what we seek in the wilderness. According to the Wilderness Act of 1964, wilderness is an area “where the earth and its community of life are untrammeled by man.” 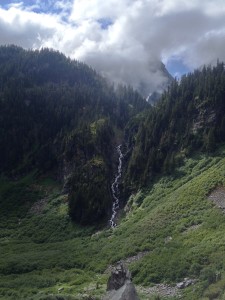 I just read and reviewed Exceptional Mountains by O. Alan Weltzien (University of Nebraska Press, 2016), which considered the tension between access and preservation, the difficulty of finding solitude in a steady stream of hikers or climbers. Weltzien argues that the “endless freedom of high country close by reconciles many to urban life,” but if urbanites crowd the mountains, that endless freedom is lost. The proximity of Seattle and Tacoma and Bellingham and Vancouver and Portland to the exceptional mountains of the Cascades promotes “quick thick visitation” or a “windshield wilderness” experience. A fellow writer told me of a cartoon showing a person on a mountaintop with a laptop open, writing “I feel so connected.” To what, we must wonder.

How can we maintain a balance between wanting to feel unconnected and having to share the wilderness with others? Stop writing hiking guides? That might help, but the Northwest is steeped in the ethos of going to the mountains. Whether it’s the macho climbers of the 1800s or the weekend backpacker/hiker who shares exploits with colleagues on Monday morning, getting to the mountains is one of the reasons we live here.

Should we ration the wilderness? Forest managers have experimented with a system of advanced reservations balanced with first-come, first-serve permits on popular hiking routes. A lottery system is already in place for the Enchantments in the Alpine Lakes Wilderness of Washington. Climbing is rationed on Mt. St. Helens and Mt. Adams. National Forest managers may try to limit use in the Three Sisters Wilderness in Oregon where 400 people often try to climb the South Sister on a summer weekend.

When I backpacked with a friend and our daughters to Cascade Pass last summer, we had to make elaborate plans for 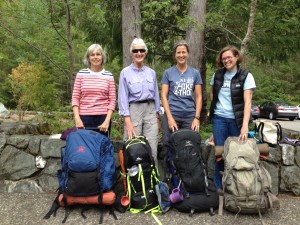 one of the most scenic and popular hikes in the North Cascades: a drop-off at the trailhead 20 miles up a dirt road, reservations the third night at the Stehekin Valley Ranch, reservations on the Lady Express down Lake Chelan, and pickup at Chelan, 180 miles from Seattle. The success of the whole enterprise depended on backcountry camping the first two nights at a hikable distance apart for two women in their 70s. We had to give up all hope of backpacking on the spur of the moment when the weather was right.

After phone calls to the ranger station and warnings by friends that this would be hard, we left Seattle at 5 a.m. on a Sunday to arrive at the ranger station when it opened at 7 a.m. to get permits for Monday night. Second in line, we scored rare permits for two nights 12 miles apart; the campsites were free to us seniors for the asking but came at the cost of high anxiety. A Boy Scout leader had camped out the night before to be first in line for his troop. We happily shared Pelton Basin with them on Monday night, and the rest of the trip went swimmingly although, of course, Cascade Pass was completely fogged in.

As with many green spaces in the cities—think Alki Beach–we are loving the wilderness to death, and the transformative power of getting away from it all requires supernatural logistics. If we value remoteness from the sights and sounds of people, if going places untrammeled by man or woman is a transformative experience, we are duty-bound to share it, but how can we get away from us all? Should we lift up the wet gray Seattle image so you don’t want to come here? Should we mention the earthquakes, mudslides, and volcanoes? Should we push farther and farther into the wilderness? Should we stop sharing pictures?

This question bedevils many who hike and many whose job is managing the wilderness experience. The combination of some advance reservations (for those hiking the PCT, for example) with a good supply of first-come, first-serve spots may have to do for now. My personal response is a bit like making small changes to ward off climate change—avoiding popular trails and popular times of the week, savoring the experience without technology other than warm boots, practicing some of the old rules of the road—downhill yields to uphill, pack out your trash, don’t feed the wildlife, bring a shovel, don’t bring dogs to the wilderness. It makes me feel grumpy to say some of these things, but preservation is worth the whine.

A startling new photograph of Harriet Tubman has been discovered, a portrait of her as a younger woman in her 40s.  When I wrote the young adult biography of Tubman in 1990, the available photos of her were pictures dating from 1894 and an early 1900s photo showing her with white hair, decades past her most active years as an underground railroad conductor and spy in the Civil War.

The new photo has emerged in an album kept by Emily Howland, an abolitionist in upstate New York.  Howland lived in Sherwood, not far from Auburn, where Tubman settled after the Civil War.  Cayuga County was a nest of abolitionists, including William Seward who helped Tubman purchase land there in 1859 for a home she shared with anyone in need.  The new photograph is an 1860s carte de visite, a small (typically 2 1/2″ x 4″) photograph mounted on a calling card handed out to family and friends, which suggests there might be more of the cards in existence.  They were particularly popular among soldiers during the Civil War, as described by Andrea Volpe in an article in The New York Times.

The discovery of the new photograph was brought to my attention by Grace Bentley, my 98-year-old mother-in-law who lives in upstate New York.