I usually write about historic trails and walks in Washington State, but this spring the Indiana Historical Society Press published a labor of love from another Washington–Washington, Indiana.  25 Sugarland Road, Letters of Love and War, 1944-1945 is a narrative of letters my parents wrote to each other during World War II, many of them sent to and from my grandparents’ home on a rural road outside of Washington.  Bob McBride and Luella Hart had been married only two months when Bob was transported to Europe to fight in the last, fierce battles of the war.  Luella bounced around her sisters and in-laws’ homes in southern Indiana as she awaited the birth of their first child.  Their letters reveal the hardships of the war both on the battlefront and the homefront and 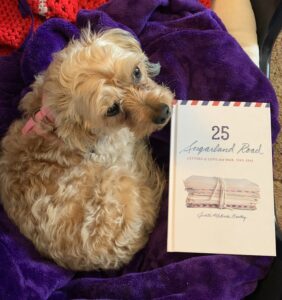 their longing to see each other again.  Read an interview about how the book was written.  It may be ordered from Indiana Historical Society Press.