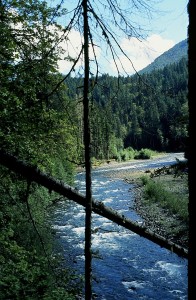 When the Press Expedition men hauled their gear up the Elwha River in the winter of 1889 and 1890, the river was wild.  When I hiked it and wrote about it more than 100 years later, the river was dammed and contained, the Altaire campground was good for a pre-hike wiener roast, and the Whiskey Bend trailhead was an easy drive.  No more.  The river has been un-dammed and unleashed to choose its own path, which has included flooding the road to the trailhead and the Altaire campground.  You may now have more sympathy for the six men, four dogs, and two mules who spent two and a half months just getting to Whiskey Bend from Port Angeles.  (This hike is described in Hiking Washington’s History.)

Linda Mapes describes “A river gone wild” and its effects on hikers in The Seattle Times, March 13, 2016.

Yakima Pass has become one of my favorite historical hikes.  The first part is delightful–to Cottonwood Lake and Mirror Lake and then south on the Pacific Crest Trail to Yakima Pass.  It is rich in Native American and railroad exploration history, narrated by George McClellan’s journals. 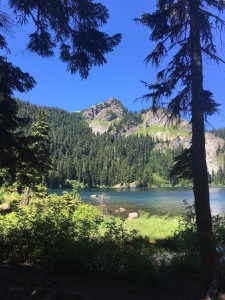 If you don’t want to climb back up to Mirror Lake, on the PCT, there is a short-cut back to Road 5480 (and your parked car) on two gullied old logging roads, which are easy enough to follow, but be forewarned that the footing can be tricky–rocky, slippery and overgrown.  When I first used this loop I could catch a glimpse of my car from this route, but now vegetation has grown obscuring that view–but not the lovely view of Lost Lake.

The hike has not changed greatly since I recounted it in Hiking Washington’s History, but here are a few clarifications: when driving to the trailhead, at the unmarked four-way intersection, veer right along the north side of Lost Lake (don’t take the sharp right). The last half-mile up to the trailhead is completely un-drivable, and parking spots on Road 5480 can be competitive on the weekend.  Although a sign points uphill to the Mirror Lake trailhead, the beginning of the trail itself is not marked by a sign but by a cairn or row of rocks, thoughtfully placed. 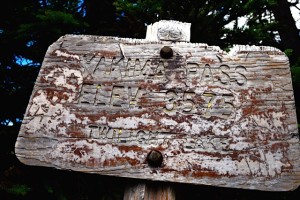 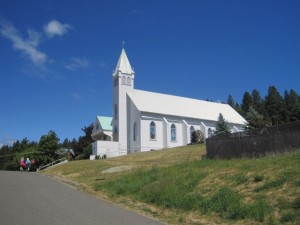 My Tuesday Trekkers group hiked the Coal Mines Trail in June 2014.  Since I wrote Hiking Washington’s History, the trail has become much more shaded by the growth of trees and brush on both sides.  Mining sites are harder to identify in the first two-thirds of the trail, but heaping  slag piles still rise above mine sites and Crystal Creek flows coolly along the walk.  Roslyn’s coal mining history is not forgotten by residents but seems less prominent.  The Northwest Improvement Company store building will reopen soon with new businesses.  The spire of the Catholic church soars above the town on the hillside, and the Roslyn cemeteries grow, including a memorial for Tom Cravens, native son who died fighting the Thirty-Mile Fire.