Like Cascade Pass, Ebey’s Landing was one of the first hikes recommended to me when we moved to Seattle in the 1980s.  Since then, I have been to Whidbey Island many times–hiking, biking, and writing at Hedgebrook, a retreat for women writers. The landscape of prairies and bluffs above Ebey’s Landing on Admiralty Inlet has not changed, thanks to the creation of a National Historical Reserve,

But since I wrote Hiking Washington’s History, the trail has changed.  The map in the book shows two legs of a walk from Perego’s Bluff to Sunnyside Cemetery.  The westernmost leg is now the main route.  It goes past a blockhouse and the carefully reconstructed house of Jacob and Sarah Ebey who named the place Sunnyside. The Ebeys were the parents of Isaac Ebey who made the first land claim here in 1850 on  what he described as “almost a paradise of nature.” 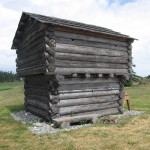 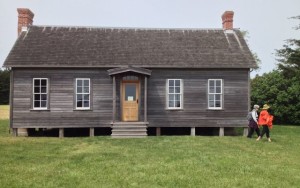 As I was finishing Hiking Washington’s History, I learned about the Lime Kiln Trail, a relatively new trail that follows portions of the old Everett and Monte Cristo Railway grade. The Old Robe Canyon hike in the book follows the South Fork Stillaguamish River on the north bank as the river flows west.  The Lime Kiln Trail starts south of the river and joins it after a mile and a half, going east along the south bank of the river to the concrete remains of a bridge that once crossed the river.   Engineers warned early on that the force of the river would wash out man-made structures.

Yes, there is a lime kiln on this trail–quite impressive on site.

During the 1800s, the kiln converted limestone into lime (calcium oxide) to make mortar and plaster for construction, including parts of the Everett & Monte Cristo Railway. Limestone from a nearby quarry was carried to the top of the kiln by small cable cars and burned in the kiln to change the rock to powder. Interpretive panels at the trailhead give the history of the railway and the lime kiln.  Artifacts along the way (pieces of rotary saw blades, bricks, a bucket) tell a visual story.

This is a 3.5 mile trail, one-way, fairly level (600 some feet of elevation gain, gained in several places) and hikable year-round. (In mid-May 2016 the salmonberries were already ripe.)  The first part follows a logging road through regrowing clear cuts but then reaches the old railroad grade and canyon.