Judy Bentley writes hiking guides, history, and biography.  She taught composition, literature, and Pacific Northwest History for more than 20 years at South Seattle College and has retired to spend more time hiking, biking, writing, and playing with her grandchildren. 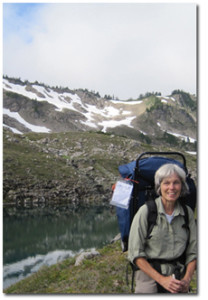 With the Delridge Neighborhoods Development Association, she conducted an oral history project about a local West Seattle school. A website showcases that history: www.delridgehistory.org.  She contributes as an oral historian to other projects of the Southwest Seattle Historical Society.  She is currently working on narrating the letters between her parents during the last year of World War II, her mother on the home front, her father in the Battle of the Bulge and the occupation of Berlin.

Judy was born in Indiana, went to Oberlin College in Ohio, lived and worked in New York City, then moved with her husband and two children to Seattle. She has been a newspaper reporter, a copy editor, a high school teacher, a community college instructor, a writer. She hikes, bikes, quilts, and has served on boards of organizations such as the Southwest Seattle Historical Society, the Pacific Northwest Historians Guild, Peace Action of Washington, and the PTA.

She lives in a home looking west over Puget Sound, a view that distracts on sunny days and turns thoughts inward on gray, rainy days. She leads walks along the pathways that have resonance for her–Alki, the Duwamish River, Coal Creek, Yakima Pass, Cowlitz Pass, and the Columbia Hills.  Listen to this interview by Feliks Banel on KIRO about history hikes in the Puget Sound area.