Staying home and walking more in your neighborhood?  There’s more underfoot than you may realize.  Cities are rich in layers of history, some visible, some not. 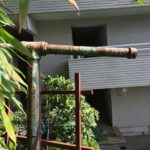 Heading out my side door, I find a clothesline pole still standing between my house and the condo building next door, trailing vines instead of drying sheets. A half-mile away is a monument marking the landing of the Denny-Low-Terry party at Alki in 1851. Those are the obvious finds.

Less obvious is the median sloping downhill in front of our house, separating two narrow one-way streets.  When we moved here 16 years ago, the hillside was overgrown with weeds.  One lone plum tree drooped with fruit each fall. In the early 1900s children walked to the neighborhood school along a one-lane dirt road paralleling a meadow. “We frequently preferred the trail along Chilberg Avenue,” recalled one resident, “to enjoy some of the most beautiful wildflowers in the open fields and leading up into ‘the woods,’ the hillside forest.” Pleasant memories for troubled times. 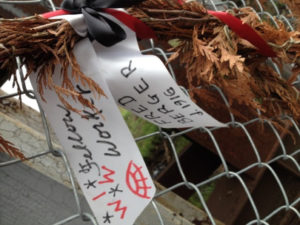 Troubled times are nothing new.  As I researched Walking Washington’s History:  Ten Cities, I often found conflict.  I had read about the Everett Massacre of 1914 when striking millworkers in the city were supported by Wobblies who arrived on boats from Seattle. The Wobblies were met with gunfire.  The dock where the clash occurred is long gone, but as I walked the waterfront in 2017, I found wreaths made out of dried cedar hung on a wire fence, each commemorating one of the 12 men killed. 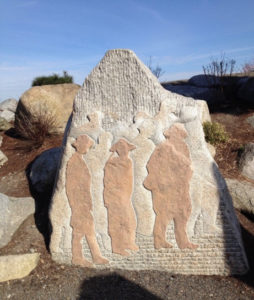 At the Chinese Reconciliation Park in Tacoma, the haunting figures of Chinese workers expelled from the city in 1885 are painted on stone, an attempt to remember and acknowledge.

There were moments of pleasure, too, when I found the cool bubbling spring behind the Bigelow House in Olympia, which supplied drinking water to the early residents.

Vancouver has not just one but three statues of women:  a pioneer mother, a Native American woman, and a World War II welder.

Where history is less visible, interpretive art recalls the work of ordinary people.  A sculpted fruit-picker’s bag sits on a square in Yakima. 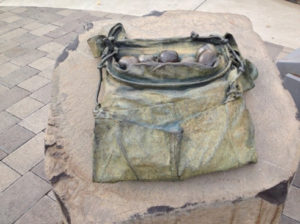 To find history underfoot, look closely as you walk, and ask why.  Then visit the local historical society when it opens again; you may find an oral history or memories that recall experiences like a walk to school.

Today the meadow along that old dirt road has been reclaimed by community volunteers with plantings of more fruit trees, native shrubs, and wildflowers. Some of the forest above remains, on a hillside too steep for development.  Walkers passing the wildflowers on this relatively quiet street are in good historic company. 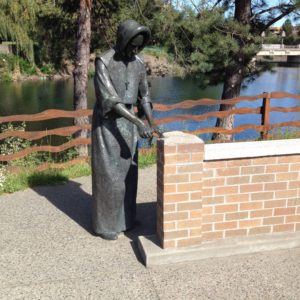 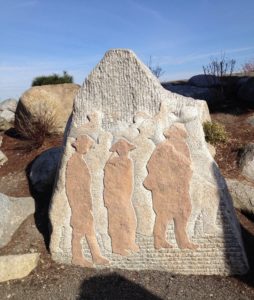 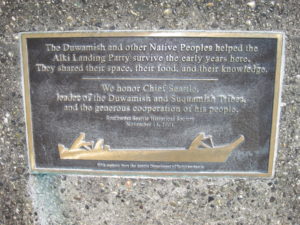