On a weekday in early August—prime wildflower season in the mountains—I returned to an old favorite, the Skyline Trail at Mt. Rainier.   Along with several hundred other people.  Privilege gained me admission with a senior pass at the Longmire entrance.  Good luck found space for our car of four in the main parking lot at Paradise.  Although the Visitor Center was closed, the bathrooms and water fountains were working.  As hoped, the lupine, paintbrush, bistort, heather, false Hellebore, pasqueflower, monkey flower, phlox, and many others were in full bloom.  It was hot, and the sky was hazy—we did not see all the volcanoes from Panorama Point–but Mt. Rainier was close.  At 7000 feet, the chunk of ice I scooped from one unmelted snowfield cooled my head, chest, and wrists.   I enjoyed the young boy who told me the hike would be much more fun on the way down and the father who pulled his family to the side of the trail because “they’re climbing.” He, too, said the fun would begin at the top.

Despite these joys, the hike was not pleasant.  People frequently stepped off the rock-lined trail in ill-guided attempts to be polite and give way to other hikers.  A woman fed Cheetos to a chipmunk, to the amusement of her companions.  Another woman carried a chihuahua in her backpack (a chihuahua at Mt. Rainier?!).  Hikers tromped on meadows for an Instagram photo.  A procession of 15 to 20 people walked up the paved path from a tour bus. A young woman plopped herself down on a purple pad in a beautiful meadow of wildflowers next to a stream.  I do not envy the ranger I complained to.  Trails are too crowded; we are loving them to death, and good trail etiquette is rare.

Media attention has focused on the overwhelming crowds at national parks this summer of 2021, even without foreign tourists.  Cooped up for months by virus and weather, people like me are thronging to the outdoors. Glacier, Yosemite, and Rocky Mountain now require ticketed entry. Hikers at Zion have waited four hours to access certain trails.  Arches is turning visitors away because the park is “full,” closing its entrance gate most days by 8 a.m.

If you hike for that iconic selfie with a dramatic skyline, the wait can be worth it.  If you hike for solitude, not so much.  For many, getting away to the outdoors means away from city noise or suburban irritations, away from commuting, from shopping, from robocalls, from scrolling Facebook.  Today, much of that distraction comes with us on the trails.  A hundred parked cars stretch down-road from popular trailheads on a weekend.  Gross blue doggie bags perch beside trail markers.  A fellow writer told me of a cartoon showing a person on a mountaintop with a laptop open, writing “I feel so connected.”

I remember hiking to the top of McClellan Butte, a nine-mile round-trip, 3700-foot elevation gain hike off I-90 west of Snoqualmie Pass in the 1990s.  It’s no easy stroll, and when I reached the narrow top, I had to share it with a guy on his cellphone, yakking away about his awesome hike, which made it much less than awesome for me.

From another hike, I will never forget the image of a group of young people “mudding”—seeing how far they could dig a truck into and out of the mud in a meadow alongside the historic Naches trail northeast of Mt. Rainier.

According to the Wilderness Act of 1964, wilderness is an area “where the earth and its community of life are untrammeled by man.”  Fat chance.

Alan Weltzien addressed this issue in Exceptional Mountains, University of Nebraska Press, 2016. He considered the tension between access and preservation, the difficulty of finding solitude in a steady stream of hikers or climbers.  Weltzien argues that the “endless freedom of high country close by reconciles many to urban life,” but if urbanites crowd the mountains, that endless freedom is lost.  The proximity of Seattle and Tacoma and Bellingham and Vancouver and Portland to the exceptional mountains of the Cascades promotes “quick thick visitation” or a “windshield wilderness” experience.

How can we maintain a balance between wanting solitude in nature and sharing the wilderness with others? If we value remoteness from the sights and sounds of people, if going places untrammeled by man or woman is a transformative experience, all should have that opportunity, but how can we get away from us all?  Maybe writers should stop writing hiking guides, everyone should stop sharing pictures.  We could lift up the wet gray Seattle image so tourists won’t want to come here.  Should we mention earthquakes, mudslides, volcanoes, and even drought?    All of those efforts might help, but the Northwest is steeped in the ethos of going to the mountains.  Whether it’s the macho climbers of the 1800s or the weekend backpacker/hiker who shares exploits with colleagues on Monday morning, getting to the mountains is one of the reasons we live here.

This question bedevils many who hike and many whose job is managing the wilderness experience.  Forest managers have experimented with a system of advanced reservations balanced with first-come, first-serve permits on popular hiking routes.  A lottery system is already in place for the Enchantments in the Alpine Lakes Wilderness of Washington.  Climbing is rationed on Mt. St. Helens and Mt. Adams.  Shuttles carry hikers to popular trailheads like Dog Mountain on the Columbia River. Timed entry or ticketing systems for national parks are being considered.

The logistics of restricted access can be daunting for the hiker.  A backpacking trip over Cascade Pass to Stehekin requires elaborate planning and a great deal of luck.   When four of us, two mothers and two daughters, hiked it a few summers ago, the success depended on securing backcountry camping permits for two nights at a hikable distance apart.  We left Seattle at 5 a.m. on a Sunday to arrive at the ranger station when it opened at 7 a.m. Second in line to a Boy Scout leader who had camped out the night before, we scored rare permits for Monday and Tuesday nights, 12 miles apart.  Our anxiety much reduced, we happily shared Pelton Basin with the Boy Scout troop Monday night.   Cascade Pass was completely fogged in and the spectacular views nonexistent, but we had to give up any pretense of hiking when the weather was optimal. 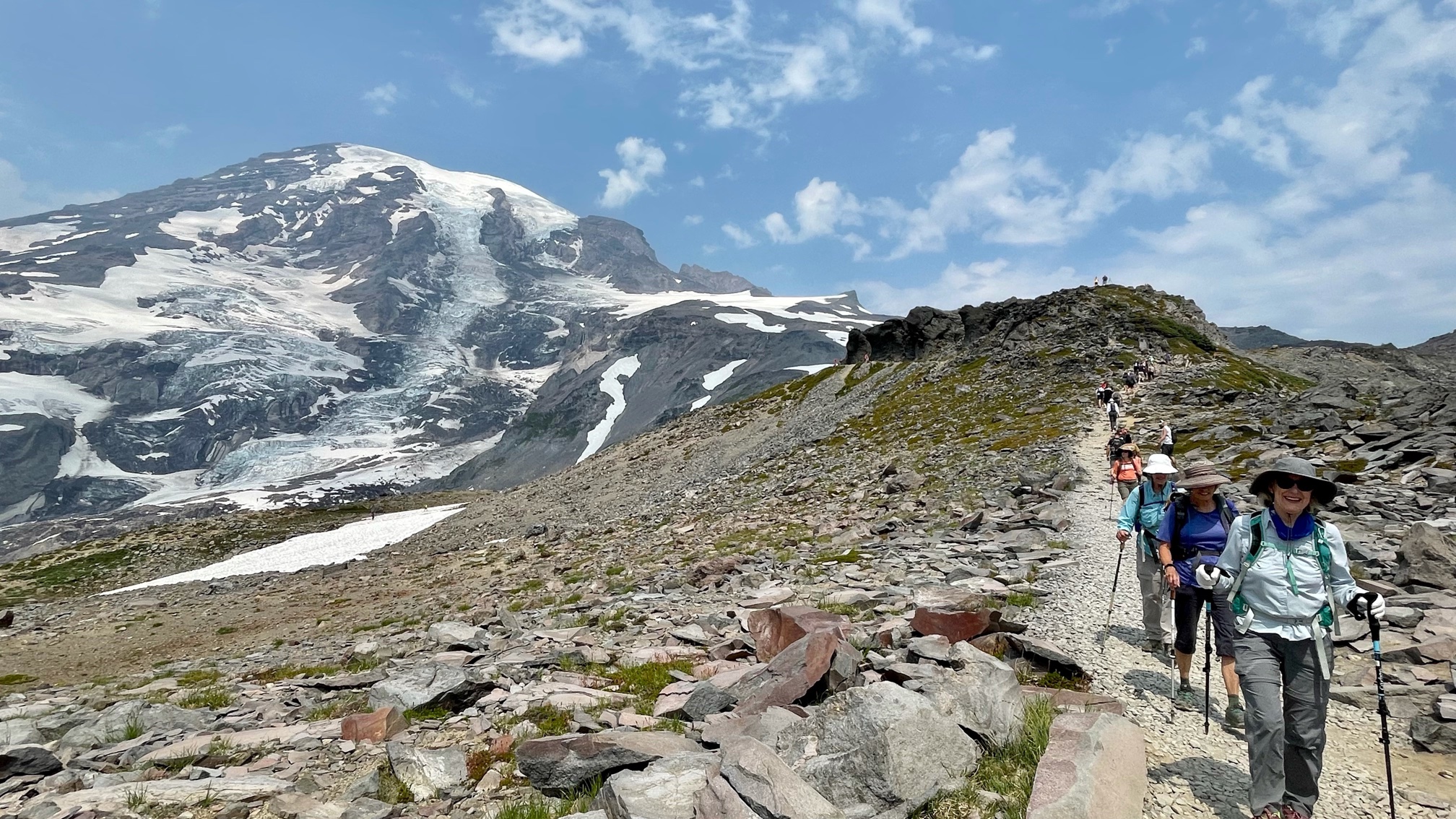 Besides planning and luck, what can an individual do?  Avoid popular trails and popular times of the week, savor the experience without technology other than good boots and a pack, but most of all practice environmental ethics, attentive to the environment and fellow hikers.  Here’s what I have learned from experience and from Leave No Trace principles.

The task of trail education is huge.  Are people uncaring or unknowing?  If unknowing, we have a huge education task.  If uncaring, we have a huge political task.  Wallace Stegner said our national parks are “America’s best idea.  They reflect us at our best rather than our worst.” Let’s keep it that way.