The road to glacial blue Mowich Lake, gateway to the northwest slope of Mt. Rainier, is a long, dusty, wash-boarded slog by car in the summer.  It was not always so. Tourists of another century took the train from Tacoma to Wilkeson and embarked on the oldest constructed trail to the national park, the Grindstone Trail.  The unlovely name betrays the pleasures of the 20-mile trail through thick forest, along creeks, over ridges, past lakes, and onto the sub-alpine meadows and glacial flanks of the mountain. 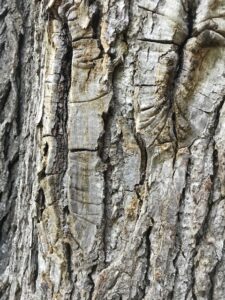 First called the Willis Trail, the trail was mapped and engineered by Bailey Willis, a geologist at the beginning of an impressive career. Willis and George Otis Smith conducted extensive surveys of the Wilkeson-Carbonado-Fairfax coalfields in the early 1880s for the Northern Pacific Railway. His surveys of resources would promote land-buying and coal-mining in the river valleys, but Willis extended the trail to timberline.   With funding from the railroad, which wanted to encourage tourism, he hired crews with shovels, picks, mattocks, axes, crosscut saws, and probably blasting supplies, aided by horse and mule power.

Completed in 1883, the trail began in the small town of Wilkeson, a mining camp.  Climbers, tourists, and hikers could stay at the new Tacoma Hotel, designed for the Northern Pacific by Stanford White, take the train to Wilkeson and hire packhorses there for the ride onto the volcano. They crossed the Carbon River at what later became the town of Upper Fairfax, a mining and logging camp (now a ghost town). Then it followed Evans Creek for two miles and crossed the creek to reach the headwaters of Evans and Voight creeks. The trail continued up a wooded ridge north of the Mowich River, through meadows of wild onions, crossed Meadow Creek and reached camp at the south end of what Willis first called Crater Lake, now Mowich Lake. The adventurous continued on foot to Spray Park, Seattle Park, and—the daring—to glaciers on the flank of the mountain. 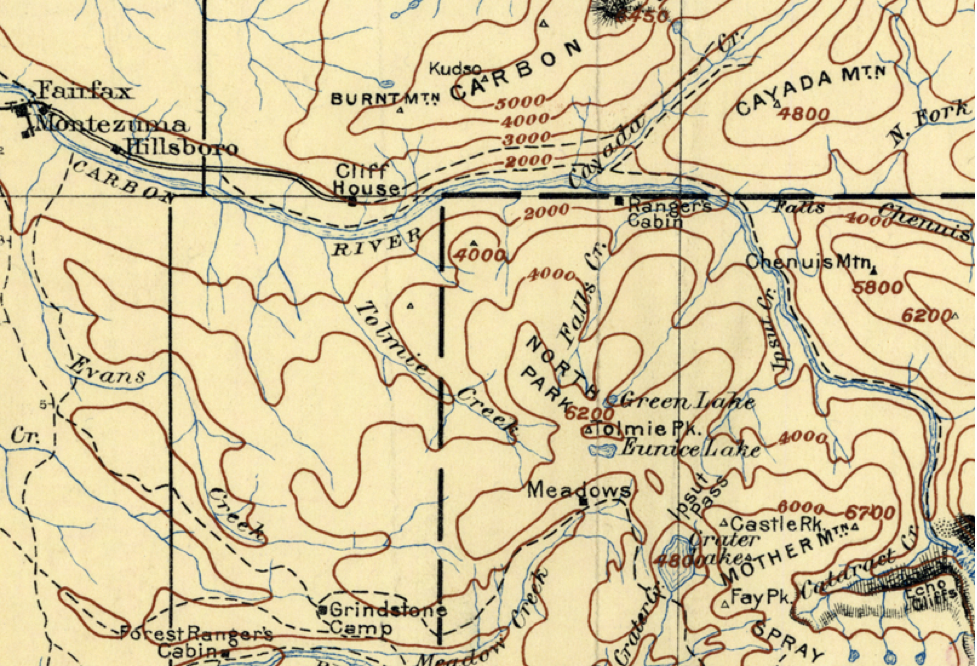 In this 1907 map, the Grindstone Trail is the dotted line that goes past Grindstone Camp and on to Crater Lake (Mowich Lake).

For the comfort of travelers, there were two “camps”:  Palace Camp, on the north bank of the Mowich River, just west of the park boundary, and Grindstone Camp, at the headwaters of Voight Creek, near the junction with the trail to Spray Park.  The camp and trail took their names from a grindstone placed there to sharpen construction tools. One of the camps may have been known earlier as Barktown because shelter for workers was constructed from bark.  Willis added four buildings to Grindstone Camp, which a Tacoma newspaper called “the lone lodge in the Wilderness.”

The Northern Pacific was keen to promote Mt. Tacoma as a national park, to give up land there for more productive timber land elsewhere. At the railroad’s request, Willis led several excursions onto the mountain’s slopes during the 1880s and 1890s.  In 1883 he guided a European expedition with the German paleontologist Karl von Zittel to the Carbon, Mowich, and Puyallup glaciers. Von Zittel was duly impressed as was Senator George F. Edmunds of Vermont who made the trip the same year and said he would be “willing to go 500 miles again to see that scene.”

In 1896 Willis brought his 10-year-old daughter Hope along when he made one of the first ascents of Rainier.  He accompanied Smith and Israel C. Russell, a noted geologist, to explore and examine the glaciers and rocks of the mountain. They started along the Grindstone Trail but departed from it to ascend the Carbon Glacier.  They established a base camp above Mystic Lake where Hope stayed for the next five days, along with the cook and Professor Henry Landes, who was not feeling well, waiting while the others climbed to the summit. She spent the days gathering firewood and flowers, mending, and floating little boats carved by the cook, according to Aubrey Haines.  “It was most lonely at night with the others asleep out there,” she wrote.  “I think those last two days, when we thought they were lost, must have been rather terrible to me,” but as the mountain stood clear in the sunset, she heard “Father’s ‘oopee,’ loud and cheery, from the slopes above us, and in a few minutes, Father came swinging into camp ahead of the others.”

Travelers on the Grindstone Trail, and reports from Smith, Russell, and Willis, revealed the mountain’s wonders and beauty to the curious and adventurous.  The scientific community pushed to designate Mt. Rainier as a national park.  At the annual meeting of the Geological Society of America in 1893, a committee was appointed to write a memorial to Congress. “Rainier is majestic in its isolation, reaching 6,000 to 8,000 feet above its neighbors,” Willis and others wrote in the petition.  “It is superb in its boldness, rising from one canyon 11,000 feet in 7 miles.  Not only is it the grandest mountain in this country, it is one of the grand mountains of the world.”

The “memorialists” further represented that the region was being “seriously marred by careless camping parties” and warned that its valuable forests and rare animals were being injured and would certainly be destroyed unless the area was policed during the camping seasons. Declaring the mountain a national park “forever” would protect people in the Yakima, Cowlitz, Nisqually, Puyallup, and White River valleys from flooding and provide “for the pleasure and education of the nation.”

The campaign was successful in 1899.  Willis Wall, the almost sheer black rock wall, visible from Seattle on a clear day, was named in Bailey Willis’s honor. The wall rises 4000 vertical feet above the Carbon Glacier.   Willis Glacier, named after he reached it in 1881, was renamed Mowich Glacier.

Today, only 1 and ¼ miles of the original Grindstone Trail is intact, where the trail reaches Mowich Lake.   It serves as a shortcut to the lake, a more direct route than Mowich Road in this section.  The trail crosses the road three times and is marked twice with roadside signs.  Those wishing to hike it as an alternative to the dust will find the first access at a new culvert on the left side of the road about three miles past the Mowich entrance to the park, just before a hairpin turn in the road. Look for a small square orange marker nailed to a tree. 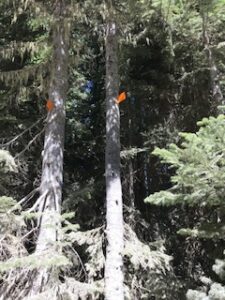 The other two accesses are marked by signs where the trail crosses the road, but these may be covered with snow in the winter.  Snowshoers should look for markers on trees if there are no snowshoe prints to follow. 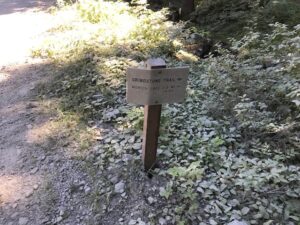 Some of the rest of the trail was obliterated or obscured by construction of the Mowich Road when it was blasted through rock in the 1930s, but much of the original eight miles of the Grindstone Trail within the national park remains, unmapped and unmaintained.  Volunteers are working to restore more of the tread that would connect the trail from the park’s boundary to the three sections near Mowich Lake.

Hikers on the current trail to Spray Park are also following about 2.9 miles of the original Grindstone Trail.  With its fields of mid-summer wildflowers, the park is a premier destination. The crew building the trail in 1883 likely named Spray Park after the falls in the creek that broke “into a mass of spray.”

Willis’s career was only beginning at Mt. Rainier.  When the Northern Pacific went bankrupt in 1884, Willis worked for the United States Geological Survey, continuing his work of mapping and exploring volcanic geology.  He went on to study the geology of the Mt. Stuart area, to map the Snoqualmie quadrangle, ascend Gold Creek, and climb Denny Mountain and Silver Peak.  In 1900 he visited the Lake Chelan area, then Cascade Pass and Sahale Peak.  Eventually he became an international expert on earthquakes and a professor first at Johns Hopkins University and then at Stanford University. 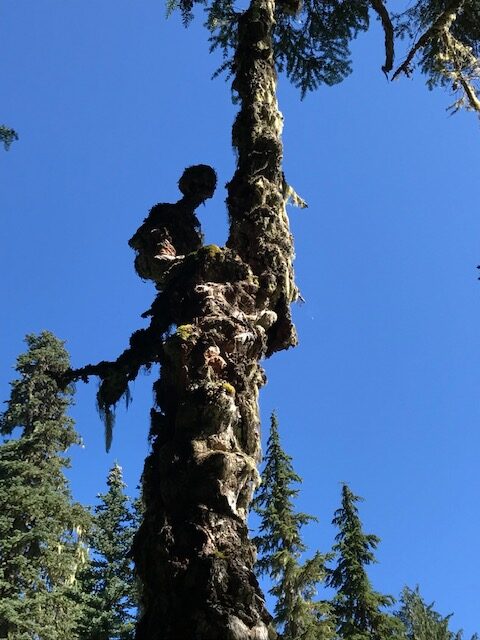 The son of a poet, Willis lovingly described the mountain that was first in his heart: “I have seen the glories of Switzerland, the grandeur of the Andes, and the grace of the beautiful cone of Fujiyama, but among the most renowned scenery of the world, I know of nothing more majestic or more inspiring than the grandeur of my own old camping ground, Mount Rainier” (The Mountaineer, 1915)

The ghost of Bailey Willis on a tree along the trail?