One August afternoon while hiking the Snoqualmie Valley Trail west of North Bend, I encountered a weathered older man reclining on the grass beside his dog and cart.   He and the dog, he said, had pulled the cart all the way to Ellensburg on trails that cross the vast state of Washington.  One summer soon, he said, he would reach Montana.

I believed him.  You can do that on the Palouse to Cascades trail that stretches 289 miles from the Snoqualmie Valley to the Idaho border.  I’ve hiked many miles of the trail, on the forested grade leading up to Snoqualmie Pass and in the dry, endless miles east of the Columbia River.

But there has been one huge gap in the trail—crossing the river itself.

The Chicago, Milwaukee, St. Paul, and Pacific Railway (known as the Milwaukee Road) crossed the Columbia on a bridge built in 1909, seven miles south of Vantage where I-90 crosses the river today. Railroad workers bunked in the community of Beverly on the east side of the river, so the bridge was called the Beverly Bridge.

The Milwaukee Road was the last transcontinental railroad to reach Puget Sound, by way of Cedar Falls to Tacoma, with a spur to North Bend.  Unlike the Great Northern and the Northern Pacific, the Milwaukee was powered by electricity, so there was no need for a company town like Roslyn to provide coal and the dangerous work of mining. Overhead wires known as catenary carried electricity from twenty-two substations.

Ultimately the electric road was too expensive. The last train crossed the Beverly Bridge in 1949. In 1980 the Milwaukee Road stopped operating; the rails were pulled, and the state took over the right-of-way.  Then the political struggle began.  Some wanted to preserve parts of the trail for possible railroad use; recreationists wanted a cross-state trail for horseback riding, biking, and hiking.  Ultimately, approval for a cross-state trail depended on compromise.  One legislator promised his vote if the proposed trail was named the John Wayne Pioneer trail. So it became the John Wayne Trail in eastern Washington and the Iron Horse Trail in western Washington (recently renamed the Palouse to Cascades trail).  A few sections would remain in private hands, operating as a short-line railroad.

The trail opened but not the bridge over the Columbia River. Trail travelers had to detour north to the I-90 crossing of the river, a highway with no shoulder and no pedestrian lane.  The bridge was placed on the National Register of Historic Places, but that didn’t pay for its restoration.  Decking on the west end was damaged by wildfire in 2014.  In 2017, the Washington Trust for Historic Preservation put the bridge on its most endangered list.  The closed bridge also came to national attention through the Rails to Trails organization and a proposed Great American Rail Trail from Washington, D.C. to Washington State.

The main obstacle was expense.  The bridge would cost $5.5 million to restore, with added railings and decks.  More compromises were made—in return for allowing the Burlington, Northern Santa Fe to remove three historic rail bridges elsewhere in Washington, the Beverly Bridge would be saved.  The Washington State legislature approved a funding package.

Retrofitting began but at the cost of human life.  In August 2021, Gabriel Zelaya, 39 years old, was laying curing blankets on the new bridge deck.  Guardrails had been removed from the bridge; there was a catenary line on one side to which workers could attach a harness, but the line had a gap, and no one, worker or supervisor, was wearing fall protection.  Zelaya fell 60 feet to an island below the trestle and died before he could be airlifted to a hospital.

His death was remembered and honored in April 2022, when the restored bridge was re-opened, to the accompaniment of the Wahluke High School band from Mattawa by civic leaders.  Governor Jay Inslee had planned to bike across the bridge and state senator Judy Warnick planned to cross on horseback, but the wind coming through the Sentinel Gap, between the Saddle Mountains on both sides of the river, was too strong.  Dignitaries held fiercely to their notes, except for Johnny, Clayton, and Lela Buck, elders of the Wanapum who have lived on the river since time immemorial. They spoke freely without notes.  One especially tall participant—Fred Wert of the Palouse to Cascades Coalition—minimized himself as a windbreak by sitting down to read. 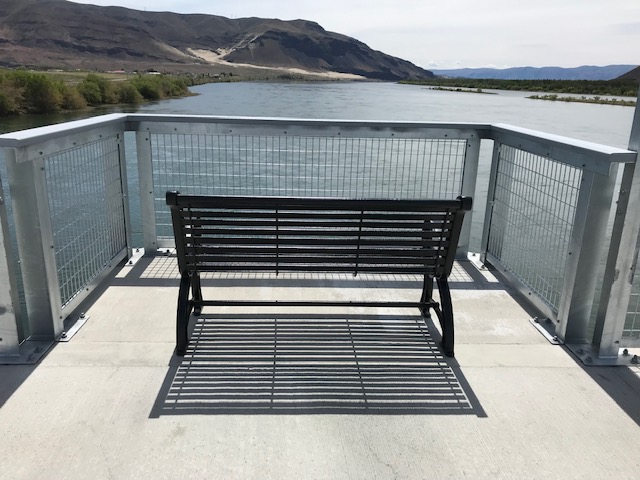 The word began to spread around the hiking and historic preservation community—the Beverly Bridge was open.  On a trip to Spokane via Palouse, my husband and I stopped for a hike.  As Highway 24 passes under the eastern approach to the bridge, words on the bridge itself announce the Palouse to Cascades trail, but there are no brown state parks signs leading to trailheads.  We found a few parking spots in Beverly, which is a small community of mainly mobile homes.  The approach on the west side comes via the Huntzinger Road heading south from Vantage.

Despite the wind (always present), the one and a half-mile walk across the bridge and back is a thrill. What the Wanapum call the Big River flows north and south under the bridge and the views from seven benches spaced along the decking are expansive; the solitude and quiet are restorative. We encountered two families walking the bridge, one runner, two guys with Maga hats, and two bicyclists coming from Wanapum State Park. 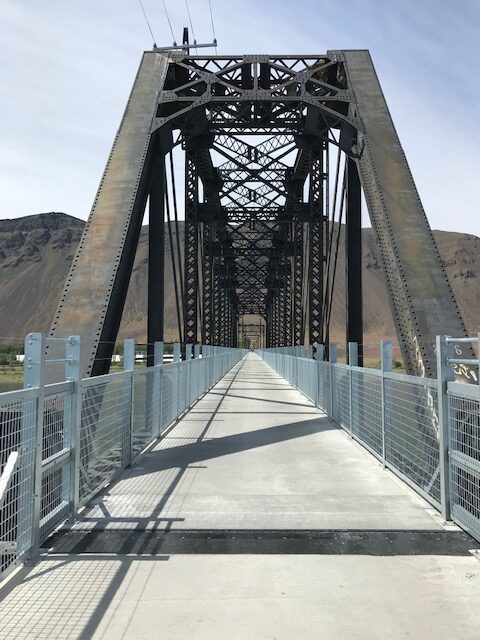 The original trestle is a work of art proudly remembered by a great-grand-daughter of H[erman] B. Earling, the superintendent responsible for all of the lines of the Milwaukee Road from eastern Montana to Seattle.  The Earling descendant (who did not give her own name) spoke near the end of the dedication when spectators were invited to comment.  She said the bridge was considered one of the wonders of the world at the time it was built.

It still is, and so is the Big River.